Nick will make the case that being pro-European means being pro-reform.

Speaking at a Reuters Newsmaker event Nick will make the following key points. 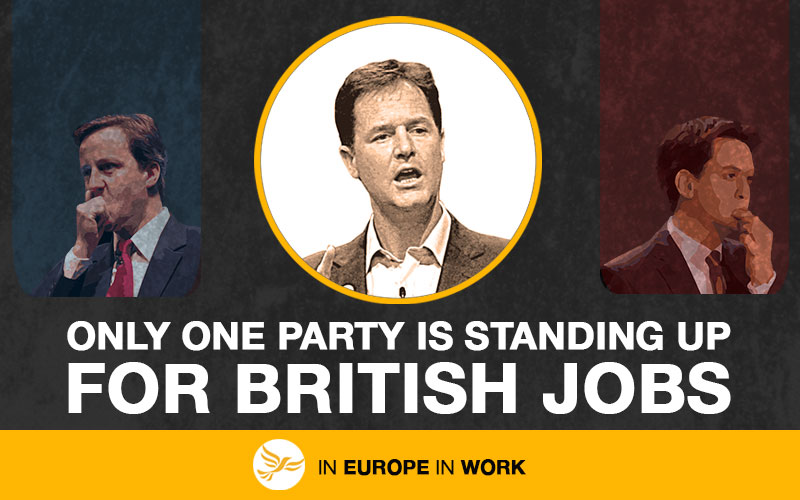 • It's "utter nonsense" to suggest that if you are "pro-Europe", you are somehow anti-reform and there are three key reasons why the Liberal Democrats are the only party who can be relied on to deliver the change Britain needs.

• Unlike the Conservatives, we understand that you cannot "secure a new settlement for Britain through a one off negotiation conducted under the threat of exit." Instead, "you do it by engaging with our neighbours, forging alliances with like-minded states and winning the argument."

• Only the Liberal Democrats are united on Europe. Whereas, "caught between their backbenchers' demands and the needs of British business, the Conservative leadership has spent the last three years ducking and weaving, looking for a way out."

• A better settlement for Britain means "Europe should do more of what it's good at, less of what it isn't." That includes more power for national parliaments to scrutinise proposals; cutting back on red tape; and reallocating wasteful spending.

• In summary, the "Liberal Democrats are now the only party you can rely on to go to Europe and deliver for Britain. We have the unity, we get stuck in, and we have a clear vision for leaner, more productive Europe which supports British values, British jobs, and the British national interest."

Nick is expected to say:

Today, as I'm sure you all know, is Europe Day. It is now less than two weeks until the British people go to the polls to choose their representatives in the European Parliament.

I have made it clear throughout this campaign that the Liberal Democrats are the nation's party of IN. We believe, passionately, that Britain is better off in Europe - richer, stronger and safer in an uncertain world.

I want people to choose us on May 22nd precisely because we will defend Britain's continued membership of the EU. By being in Europe we can deliver the trade needed to safeguard the recovery, boost Britain's businesses, and create jobs for our young people.

The economic rationale for being in Europe should speak for itself, but making the case for IN isn't easy. The Eurosceptic establishment has gone unchallenged for decades and before you even get to the real issues at the heart of this debate, you have to penetrate a wall of assumptions and myths.

That the EU has morphed into some sort of sinister superstate.

That we send £55m of your taxes to Europe every day.

The net figure is far lower and is dwarfed by the economic gains from EU membership, which the CBI estimate at £3,000 for every household.

Or the biggest myth of all - the idea that if you are pro-Europe, you are somehow anti-reform. That if you are in favour of staying IN, you think the EU doesn't need to change.

It's utter nonsense. We do have to take some responsibility for this stereotype: the internationalists have been too quiet while the isolationists have complained endlessly about all of the things they hate about Europe, creating the impression that they have an agenda for change and we do not.

The idea that the right has a monopoly on reforming Britain's relationship with the EU is totally false. My party argues the case for reform in parliament, in the media, and on the doorsteps, every day of the year.

In fact, I believe there are three reasons why the Liberal Democrats are now the only party you can rely on to deliver the change Britain needs.

First, we understand, unlike the Conservatives, that you cannot secure a new settlement for Britain through a one off negotiation conducted under the threat of exit.

Don't get me wrong: if David Cameron does end up embarking on his repatriation project I have no doubt that he'll be able to agree various minor opt outs and exemptions for Britain with other European leaders. But we wouldn't let the French or Germans pick and choose the bits of the Single Market they like, so the idea that they would do the same for us is wishful thinking. Angela Merkel made that much clear in her address to Parliament earlier this year.

You fight Britain's corner effectively not by going on a whistlestop tour of Europe's capitals, a list of make-or-break demands in hand. You do it by engaging with our neighbours, forging alliances with like-minded states and winning the argument.

Second, the Liberal Democrats enjoy the unity needed to see through reform.

How can a party implement a programme of change when that party is, itself, divided on the basic question of whether to be in or out?

Ed Miliband has taken an almost unbroken Trappist vow of silence on the issue, precisely to avoid provoking and exposing these divisions.

David Cameron has set himself on a collision course with his backbenchers because, no matter what repatriation package he negotiates, it will never be enough to satisfy them.

Caught between their backbenchers' demands and the needs of British business, the Conservative leadership has spent the last three years ducking and weaving, looking for a way out. David Cameron started with grand plans for the repatriation of powers, then he shifted ground when those plans came under fire from business. Now he doesn't even talk about repatriation, instead proposing a mild seven-point plan, most of which wouldn't even require treaty change.

None of this has anything to do with the real issues - the need for a more competitive EU - it's all about managing internal Conservative party divisions.

The Liberal Democrats, on the other hand, are united in our view that we should stay IN Europe. We don't need to argue about it, we simply want to get on with outlining and securing the changes that we need.

Finally, the Liberal Democrats can deliver a better settlement for Britain reform because we understand that this isn't simply about "less Europe". The Dutch Prime Minister, Mark Rutte, recently said decisions should be "European where necessary, national where possible". I would put it slightly differently - Europe should do more of what it's good at, less of what it isn't.

Yes, we need to ensure that Brussels doesn't meddle in things which ought to be the preserve of member states. National parliaments should play a much bigger role in scrutinising proposals from Brussels, and where those proposals are unacceptable, they should work with other nations to send them back to the drawing board.

Yes, we need to cut back on unnecessary red tape, which particularly hits our smaller businesses. We should exempt the smallest businesses from EU legislation where appropriate, as my colleague Ed Davey did when he negotiated the removal of accounting rules from firms with less than 10 employees.

And yes, we need to build on the UK's success in negotiating a £30bn cut to the EU budget by reallocating wasteful spending towards job-creating policies such as cross-border energy and transport infrastructure, the digital economy, and research and development.

But there's another side to this ledger too - and one you only really understand if you value the benefits of European cooperation. In today's world our greatest challenges are those which demand we work across borders. These are the areas where we need to do more, not less.

The single market - pioneered by Margaret Thatcher - is the crowning achievement of the EU. But it's unfinished business. For our budding technology companies in places like Shoreditch, red tape still holds them back from expanding into the European market and creating new jobs. The same is true for our service industry and our energy companies. I want us to work with our European partners to sweep those obstacles away.

Second, we should redouble efforts to sign a comprehensive trade deal with the USA, which could be worth up to £10 billion extra to the UK economy each year, and the EU-Japan trade agreement, which could increase UK GDP by £5 billion a year.

Completing the single market could increase our national GDP by 7% while completing the EU's trade agreements and increasing EU R&D spending could create over 300,000 new jobs in the UK.

Then there are further steps that we should take, together, to improve our collective security.

For example, I want us to build up the EU's capacity to tackle cross-border problems like cybercrime, VAT fraud and money laundering.

On defence, there can be and never should be a European army. But we do need to strengthen our collective defences in the face of continuing austerity and uncertain regional security. The European Defence Agency, working together with NATO, should help member states to pool and share military capabilities.

And on climate change, the only solutions are international. We should continue to use our position of leadership to secure new, ambitious and binding commitments to reduce greenhouse gas emissions across the whole of the EU.

So for these reasons, the Liberal Democrats are now the only party you can rely on to go to Europe and deliver for Britain. We have the unity, we get stuck in, and we have a clear vision for leaner, more productive Europe which supports British values, British jobs, and the British national interest.

Pro-Europeans are the real reformers now.